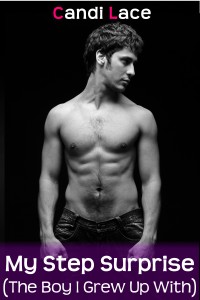 When Jenny’s best friend Sally convinced her to join her at a beach party to celebrate their High School Graduation, she didn’t expect things to get as crazy as they did. She never thought she’d muster the courage to enter the infamous ‘Kissing Shack’ where random strangers make out in the dark, especially since she’d never been kissed before. By the time she left the shack, she definitely didn’t expect to come face-to-face with the one person in the world she shouldn’t have been kissing passionately inside that room: the boy she grew up with, Darren.

Feeling humiliated and confused, there was only one thing left to do: run. But Darren had other ideas, leading to yet another first experience for Jenny, a hard and unprotected one.

“Go on, Jen,” Sally prods me in the side with her elbow and nods towards the large, temporary structure they’d constructed outside the beach club. “Everyone’s doing it.”

I observe for a moment, noting the queue of party goers, lined up outside what apparently is called the Kissing Shack, which Sally is convincing me to enter.

“But…” I protest, looking again at the types of girls waiting at my end, drinks in hand, giggling amongst themselves, as if it’s all a big joke. They’re going to go in there, while some guy goes in on the other side, and make out in the dark through a hole in the wall not knowing who is on the other end until the big reveal when they both exit. Of course it’s a joke to them, they’ve probably sucked plenty of face without even knowing the other person’s name.

Sally lets out a laugh.

“You think any of them care? They’re all drunk!”

“I just imagined something a little more… I dunno… romantic, for my first kiss?”

“That’s your problem, Jenny, you take these things way too seriously.” Sally grins.

I want to scoff at her, tell her it’s easy to say so when you have your pick in terms of guys. It’s not so simple when you’ve always been the odd one out, the one who never gets asked to dance, never gets asked out, never been so much as kissed.

“At least once you get this over with, you won’t have this big issue hanging over your head that it’s a first time, and hence somehow significant. Then you can focus on just having fun with stuff, don’t you think? Especially now that we’re heading off to college. You know how things are there.”

I want to argue more, tell her that in college – no matter how things supposedly are – I’m probably not going to get much interest either. I’ll be spending the years there much like High School, on my own, with only a select few friends to keep me occupied. And those few friends no doubt will be off to stupid frat parties, getting hit on by everyone, while I wait around in the corner by the bar.

But then… It’s the last summer I spend at home before I’m officially a college student. That’s pretty big, isn’t it? How can things not improve from here on out?

“Don’t you think whoever is in there will be a bit upset to find me stepping out with them?” I ask, already dreading the potential humiliation in case the guy makes a scene afterwards.

“As I said, they’re all drunk. Plus, this isn’t High School anymore, what are they going to do, talk for a bit and then forget about it. It doesn’t matter. The old rules no longer matter,” Sally insists, shoving me forwards with her hand on my lower back.

I swallow, hard, finding my heart hammering away in my throat and my breathing grow faint. Am I really going to do this?

She hands me a shot glass of Tequila, which I down in one go. Nothing like a bit of liquid courage.

“Want another?” Sally asks, while we zig-zag through the crowds and right towards the girls’ entrance of the kissing booth. How it works is you go in from the side, spend however long you want in there, or until the impatient next person next in line bangs on the door, and exit out the front where you get to see who was in there with you. What a stupid concept.