Used at the Pub – Lolita Minx 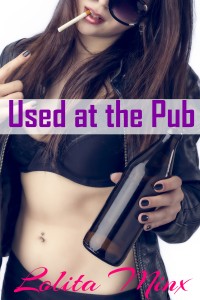 The memories of the victory celebrations in the locker room after Gary’s team won were still fresh in my mind when he took me out for some drinks at our regular pub. I knew that our night out would end with a trip to the facilities for some drunken fun, but I hadn’t foreseen that some of Gary’s team mates would turn up, eager to join in again…

It had barely been a week since the orgy in Gary’s team’s locker room and the memories of that afternoon were still extremely vivid in my mind. Every so often I would catch myself recalling glimpses of the debauchery I was subjected to at the hands – or cocks – of Gary’s mates and my heart would start hammering all over again. What was even better, Gary had been insatiable ever since, his usual passionate kiss to greet me when he got home from work had become more urgent, resulting in me being bent over the kitchen table more than once in the past week.

Tonight we were hellbent on celebrating again, nothing to do with sports, just a regular date night for the two of us. We were going to go for a quiet couple of drinks to our local pub, and then see where the night took us.

It turned out, we need not have looked further than the old pub for some good old fashioned fun. Neither did the other patrons.

Gary and I have always known how to have a good time and that night was no different. We had a few drinks, watched as some of the other regulars tried to settle an old score over the dartboard, and then he gave me that look. That look, which I knew so well…

“What do you say, love, we take things somewhere more private,” Gary whispered in my ear, after brushing a few locks out of my face.

I was glowing with anticipation – or the after effects of the Vodka-Redbull I’d been enjoying that evening. Either way, I was well up for it.

“Sure thing. So long as by more private, you mean not very private at all…” I winked at him and he broke his dark, brooding stare for only a moment, when a knowing grin appeared on his lips.

“You know me. That’s always what I mean.” Gary got up, and firmly took my hand, ready to lead me into the back of the pub. The bar was mostly quiet, with only a few people around who were engaged in deep conversation with one another. The ladies room would be free, I knew that already. The ladies room in this place was always free for us.

Gary fidgeted with his phone before putting it back in his pocket.
“What’s going on?” I asked, but he just shook his head instead of responding.

Work perhaps, I thought. I was wrong, but I didn’t’ know it yet.

As soon as he led me inside, and I heard the door shut behind it, his hands were on me. All over me. I closed my eyes as he started to suck on my neck, the delicious tickle was getting my juices running. Not that I’d been dry at all since the night at the football ground. No, my clit was a throbbing and constant reminder of all the pleasure I’d been subjected to. I couldn’t get the memories out of my mind for more than minutes at a time, before they’d be back, pushing me to do it all over again.

I slipped my hand into Gary’s trouser, pleased to find that he was equally ready. Of course Gary generally was. I don’t think I’ve ever found him limp. The man could jackhammer me against a wall even if he was running a fever or otherwise in less than perfect condition.

He groaned in to my ear when I closed my fingers tightly around his thick girth and began to stroke him. Then, the biting started. He threaded his fingers through my hair and tugged my head further to the side. I loved having my hair pulled and he knew it.

2 comments for “Used at the Pub – Lolita Minx”