Punished by the Professor – Liliana Troy

by explicittales on 2nd December 2014 • 0 Comments 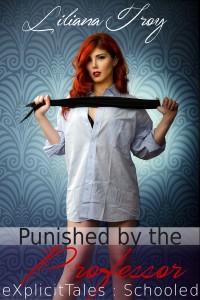 Tall, dark and handsome Darius has always been the noisy one in class; the trouble maker. If he’s not cracking inappropriate jokes, he’s staring at prof Troy’s rack. Today she’s had enough and vows to teach him a thing or two that are not in the curriculum. Unwanted behaviour can only be corrected by consistent instruction and harsh & unwanted consequences, which is exactly what Liliana Troy is planning on dishing out.

“If everyone could open their books to page 200…” my voice trails off at the sight of Darius,  resident pest and troublemaker, chatting to a couple of his classmates. Looks like what could have been a relaxing end to a warm October day on campus is about to get a lot more frustrating.

Darius looks up, with a crooked grin exposing bright white teeth through full dark lips, while I look on, hand resting on my hip, about to lose my composure. He sure is a handsome boy, with his expressive brown eyes, mahogany skin and broad, muscular physique. But why must he be such a royal pain?

“Of course, darling, anything for you.”

“You’ll address me as Professor Troy,” I bark.

Darius leans back in his chair with his arms folded and nods in faux-agreement.

“Sure, Professor Troy. You know I’ll do anything for you.”

I let out a deep sigh of despair, but try not to let it show.

“I’m sorry, what were you saying?” Darius smiles in a most infuriating way, much to the amusement of his friends who can’t contain their laughter.

“Page 200.” With that, I turn and focus on the rest of the class, who have actually come here to learn something, not just to act out a misguided parent’s dream of having their spoilt offspring be the first of the family to attend college. As the first generation to be reasonably well off thanks to his daddy’s business success, Darius and his siblings have turned into right monsters. No discipline at all. His sister, Tarah is exactly the same.

From the corner of my eye I note a sea of heads down, looking at their textbooks, studying the Bauhaus movement as they should be. Except for one. A pair of deep, probing eyes, staring my direction from thick black lashes. Darius. In all my years teaching I’ve never encountered such a pest. This type of behaviour is exactly why I went into higher education; you tend to weed out the troublemakers that way.

Rage bubbles up in me, threatening to boil over. If there ever was a boy who needed a good spanking growing up. Of course, it’s too late now… Or… No, I can’t possibly… Or could I?

I take another deep breath, battling the smile that’s about to crack through. I mustn’t let my inappropriate daydream take over.

Another glance, the same stare. He’s now obviously checking me out, running his thumb over the curve of his lower lip. That same move would drive me wild in just about anyone less irritating than him. But I can’t deny that he’s attractive… It’s going to make what’s to come a lot more palatable.

I give the class fifteen minutes to finish the chapter, followed by an opportunity to ask questions. They’re raring to leave, which isn’t surprising as for most Art History is the last class of the day on Wednesdays.

While I pack my stuff I overhear Darius and his friends discussing some kind of party they’re planning for the weekend. A more sensible person would have their revenge trying to ruin these plans,  say by tipping off parents before they find their house trashed. But nobody’s ever accused me of being sensible before…

An opportunity for my revenge will come, and soon.