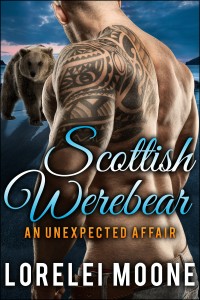 The first in the brand new Scottish Werebears series by our newly signed author Lorelei Moone.

Romance novelist, Clarice Adler, has lost the inspiration to write ever since dumping her cheating boyfriend. How do you dream up a plot of two people falling in love, when you’ve stopped believing in love yourself? But her deadline is looming, and her career hangs in the balance, so she decides to lock herself away on the secluded Scottish Isle of Skye to finish her manuscript. Upon meeting Derek McMillan there, it seems she’s found her new muse and the words start to flow out of her as if by magic. Clarice falls for him, hard, despite knowing nothing about the man, except that he’s unavailable.

Derek McMillan has been managing his farm and renting out a few holiday cottages on his own for years now. He deals with the occasional tourist for some extra money, but mostly keeps to himself. When he first lays eyes on the curvy beauty, Clarice, he immediately regrets accepting her booking. Lightning strikes, and as much as he tries to deny it, his inner bear knows that she’s his mate. But he’s a shifter, and she’s a human, and the two can’t ever mix, can they?

In this steamy paranormal romance novella, follow along as an impossible love blossoms between two people, who couldn’t be more different. One might say fate intended for them to meet, if you believe in that sort of thing, but they’re both set on fighting their attraction with everything they’ve got. They’re going to need another push to admit to themselves as well as each other what’s going on…

Please note that this is the first title in the Scottish Werebears Series. Each book features a different couple from first meeting to HEA, as well as an overarching external plot that won’t be fully resolved until the end of the series.