Saved by my Stepbrother – Candi Lace 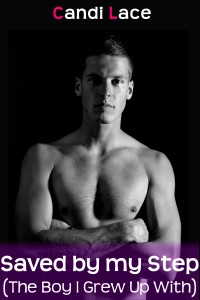 Eighteen year old Milly has always wanted to be someone she’s not: prettier, skinnier, more popular… When shortly after Graduation, members of the in-crowd invite her to a barbecue at the local beach, she feels she’ll finally be accepted. Only things don’t turn out that way and it was all a big, humiliating joke. Just when things seem hopeless, her protector, the boy she grew up, with turns up and saves her from the bullies. He reassures her she’s not as ugly and unwanted as they made her feel, in ways she could have never imagined. When he takes her virgin pussy, unprotected in his truck, she realises that her very first time is going to be the beginning of a whole new era…

Another version of this story without pseudoincest has been published on Google Play and Apple iBooks under the title Jamie, my Savior

Today was going to be different. Today, on the first sunny day after Graduation, was going to be my redemption, my chance to get away from the stigma of being the fat chick in class throughout High School.

Sure, Megan Trainor may sing about how guys like big booties, but that hasn’t been my experience. Perhaps the boys in Leymere just have different tastes.

It started innocent and promising enough, with Leila and Trish inviting me personally to the barbecue they’d planned this Sunday. They smiled and flashed their perfect white teeth at me, handed me an envelope with the invitation and insisted that I must come.

Only, I had been so hopeful that Graduation would bring in a new era for me, that things would change now that we’re all getting ready to go to college after the summer, that I took them completely at face value. What a mistake that was.

The wetness of my clothes combined with the arrival of dusk has chilled me to my bones. It doesn’t help that they’ve locked me in a dirty, smelly bathroom, right after pouring about a gallon of beer down the front of my brand new dress. They took pictures, even a video. No doubt the latter has already appeared on YouTube, potentially ruining any hopes of me starting College with my head held high.

Ours is a small town, and this isn’t something that will vanish into obscurity this quickly.

The blackness of the locked room is getting to me, threatening to swallow me whole, but I’ve already cried and screamed so much I can scarcely utter another word.

How can people be so evil?

An exhausted sob leaves my lips as I sink onto the ground, as far away from the toilet bowl as I can manage, and wrap my arms around my head, hoping, praying that this nightmare will end.

“Alright, where is she?” A voice speaks outside.

It’s familiar, unmistakeable, since I’ve heard it so many times before, but part of me wonders if I’m just hallucinating.

“Who?” Leila responds, I can hear the remnants of a devious grin in her tone.

“You know who, I found the invite. Don’t act like I’m stupid.”

“Now, Jamie, I would never-” Leila tries to placate him, but is interrupted before she can finish her sentence.

“Don’t give me that shit, tell me where my sister is! Right now!”

Could it be? It really is him, isn’t it. Jamie, my stepbrother. The boy I’ve admired all my life, and one of the few people in this world who is actually nice to me.